Feedback on Exly is an informative tool that helps you understand how your offerings are being perceived by the end-users. Based on the positive, negative, or neutral feedback received, you can work on improving your content and offerings by sticking with the tactics and styles that are well-received and working on the ones that aren’t. This way you can provide an enriching overall experience to the end-user and grow as a creator.

How does the Feedback tool on Exly work?

The Feedback tool on Exly allows you to understand how the end-user is assessing your offerings. After every class/course completion/workshop/one-on-one appointment/product order, etc, the end-user receives an email where they are asked to rate the said offering. Once they submit their feedback, the result is available for viewing on the Creator Tool page. However, you can access the collected feedback through the Feedback option on the listing cards or by following this step-by-step guide:

Step 1: On the Creator Tool page, scroll down to the Workflow Tools menu on the left side and click on Feedback. 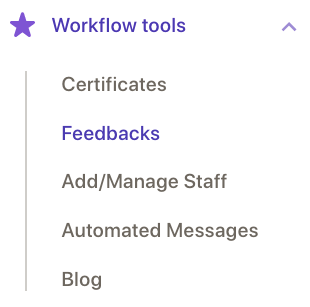 Step 2: On the right side, you will see a detailed breakdown (pie charts, average rating, etc.,) of the feedback shared by the end-users for your offerings all compiled on the same page for better understanding. 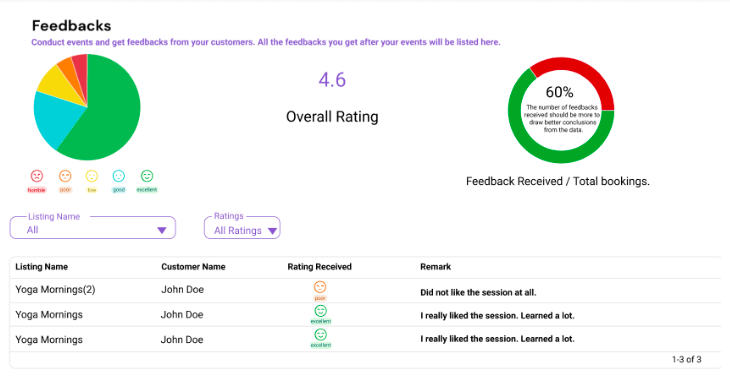 You can use the Listing Name filter to view and analyze the feedback collected for a specific listing by clicking on the drop-down menu and choosing the listing of your choice.

How to study the feedback received?

- Ratio of feedback received per number of total bookings in percentage

Every end-user chooses a rating (here, an Emoji) when filling out the feedback form based on how good or bad their experience was, the ratings are listed below:

You will also notice that a certain percentage appears in the center of the donut chart, and you can decipher that by referring to the pointers below:

a. 0-33 % - The number of feedback received is very low. Conclusions drawn may not be fully accurate.

b. 33-66 % - The number of feedback received should be more to draw better conclusions from the data.

The feedback section will automatically get updated as soon as any feedback for the offering/event conducted is submitted by the end-user. But if you want to disable this feature, you can reach out to your Account Manager, and they will help you with the same.

Did you find it helpful? Yes No

Send feedback
Sorry we couldn't be helpful. Help us improve this article with your feedback.